The Cíes Islands archipelago is a natural area which has numerous protection systems, being especially remarkable for its inclusion in the National Parks Network. The restrictions on the number of daily visitors allowed on the islands is one of the main measures adopted in order to ensure their preservation.

Originated by tectonic movements in the Quaternary, the islands are part of a mountain range that sank into the sea several million years ago. The configuration of the islands has two well differentiated parts: the eastern part of the inland estuary is a soft coast with large sandy areas and forests, while the western part is a succession of cliffs and caves formed by the action of the sea, where thousands of bird pairs have their habitat.

Currently the archipelago is completely uninhabited. It is a natural paradise with virgin beaches, dune systems and pure nature, totally disconnected from the madding crowd, the only access is by boat.

In 1980, the Cíes Islands were declared a Natural Park with the aim of preserving, conserving and regenerating this natural space, promoting its knowledge and making possible a public use compatible with the conservation of nature.

Later, in 2002, the Terrestrial Maritime National Park of the Atlantic Islands of Galicia was created, made up of a group of archipelagos, islands and islets that are Cíes, Ons Island, Sálvora and Cortegada.

National parks are natural areas little transformed by human action that, based on their scenic, geological interest, their ecosystems or the uniqueness of their flora and fauna, possess aesthetic, ecological, educational or scientific values ​​for which they deserve special protection. In the Cíes Islands, therefore, all activities that alter or endanger the stability of ecosystems are excluded.

By regulations, visitor access to the Cíes Islands is very limited per day and they also have other protection systems such as their inclusion in the European Nature Network – Places of Community Importance LIC or in the 2008 OSPAR Convention – and their consideration as a Zone Special Protection for Birds ZEPA.

The climate of Cíes Islands is quite unusual. Like the other islands which are part of the National Park, it has an Atlantic transitional sub-humid Mediterranean climate, which means that it rains significantly less than it does on the coast and that the temperatures are slightly higher.

In the Cíes Islands it rains almost half that in the nearby coastal areas (Vigo, Cangas, Baiona), which shows that the effect of insularity is very important. This is because the low altitudes of the islands are hardly an obstacle to clouds, in contrast to the barrier of coastal mountains up to 700 meters high.

The relative scarcity of rains, together with the shallow depth of the soils, causes a drop in available water in the summer months.

The average annual temperature of the islands ranges between 13 and 15 degrees, with fluctuation rising in the spring and summer seasons to 20 and 22 degrees on average, reaching maximums of up to 35 degrees.

Among the flora on the islands, the trees are quite remarkable, the pine and the eucalyptus trees prevailing over other species. However, there are also some endemic species which only exist in this environment, such as the Sea Thrift or the Camarinha.

Around the 1950s, by order of Franco, the island was subjected to a repopulation of eucalyptus and southern acacia. On one of his visits to the islands, the Caudillo considered that it was necessary to set up shady areas to protect themselves from the suffocating heat during the summer days. Currently, in the Cíes Islands there are around fourteen species of eucalyptus.

Among the bushes, the gorse, the rockrose, the torvisco and the silveira predominate. In the most protected areas, the gorse acquires a large size serving as a barrier for the colonies of seabirds.

Of all the plants on the islands, the most important and greatest ecological value are those that appear in dunes and cliffs, since they are the only plants that occur in this environment, rare and endemic. Among all of them, the Armory or Herba de Namorar, formerly used to make magical concoctions related to love and fertility, and the Camariña, a shrub that gives small edible fruits, stand out.

Cíes Islands have a very special terrestrial fauna. This archipelago is the habitat of the European shag, which is certainly one of the most peculiar species that can be found in the area and one of the most spectacular examples of adaptation to the marine environment existing in the nature. This bird lives in the archipelago together with the biggest colony of yellow-legged herring gulls in the world, as well as other species such as the dark gulls, the guillemots or the European storm petrels.

The shag cormorant is one of the most spectacular examples of adaptation to the marine environment that exists in nature, since, despite using the aerial means to move around, its entire structure is designed to function with incredible ease under marine waters and capture the fish that make up their food. Their main enemy is the fishing nets, where they appear drowned as they cannot return to the surface. This species was recently listed as endangered in the Red Book of Birds of Spain.

In addition to the birds that reproduce in the park, throughout the year the presence of other marine and aquatic birds that make use of the park during their migratory and wintering periods is frequent, such as the peregrine falcon or the goshawk.

Due to this great natural wealth, the island has several ornithological observatories. The most visited are the Alto da Campá, in the Faro Island, and the Faro do Peito, in the Monteagudo Island.

Among the amphibians we can find salamanders, Iberian newts and Iberian pintojo sapillo.

Reptiles include the Ocellated Lizard, the Iberian Lizard, the Tridactyl Skink and the Ladder Snakes, among others.

The marine environment makes up approximately 85% of the Galician Atlantic Islands Maritime-Terrestrial National Park. The underwater area surrounding Cíes Islands is one of the richest ecosystems in the entire Galician coast and it has an important kelp forest of brown algae and corals.

The so-called coastal water outcrop system, which consists of a process of circulation of water entering and leaving the Galician estuaries, and the mixture of fresh and salt water, favor the concentration of nutrients and microorganisms that are a source of food for the rest of marine species.

The seabed of the National Park are made up of four well-differentiated layers: the first consisting of sand, the second consisting of gravel, the third consisting of Maërl (a type of coralinaceous algae, where different marine species are raised) and the fourth consisting of rocky elements.

Barnacles and mussels are raised on the cliffs exposed to strong waves. In its underwater part, very stony, you can find crab, spider crab, lobster and octopus. On the beaches of the most protected areas there are a multitude of bivalve molluscs, as well as turbot, plaice and sole. The rocky but protected areas of the interior of the islands are populated by true forests of anemones and numerous sea urchins.

We can also find other species that live under the waters of the National Park such as: bream, otter or starfish.

Usually the waters that surround the Cíes are visited by dolphins, whales and sea turtles. 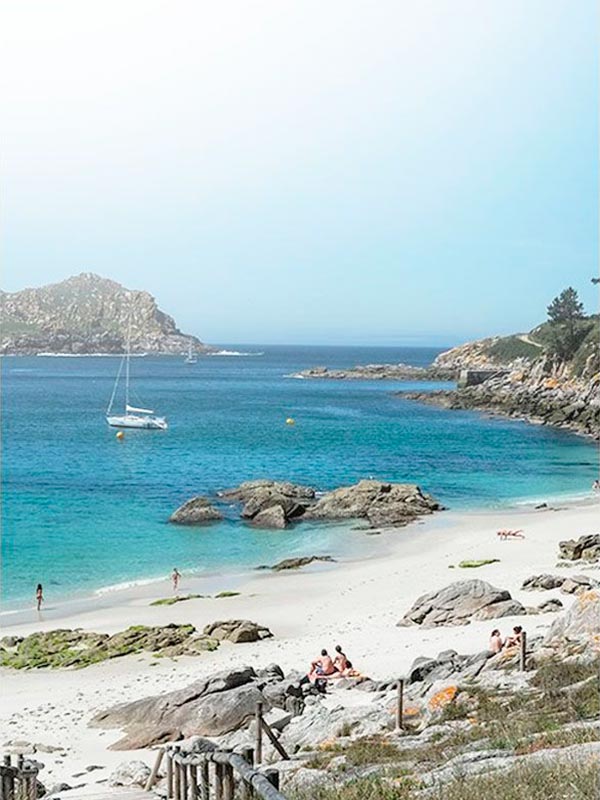 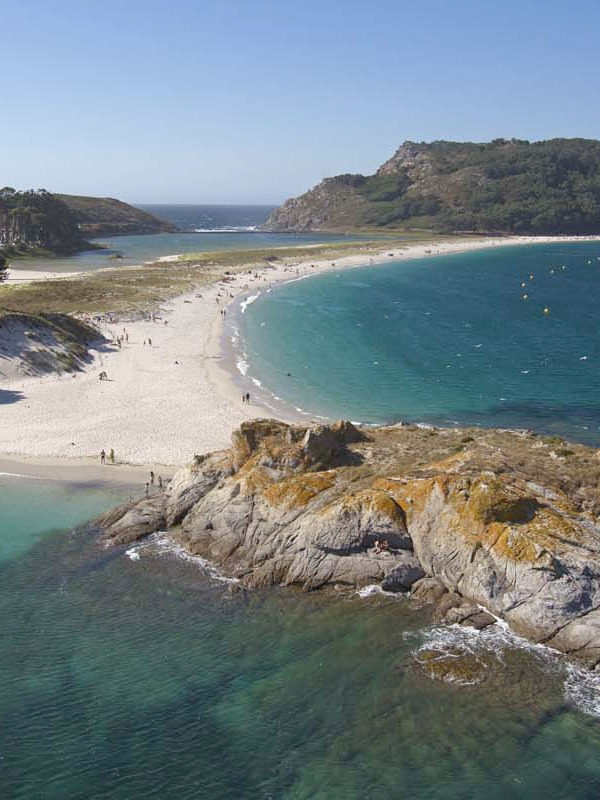 The best beach in the world 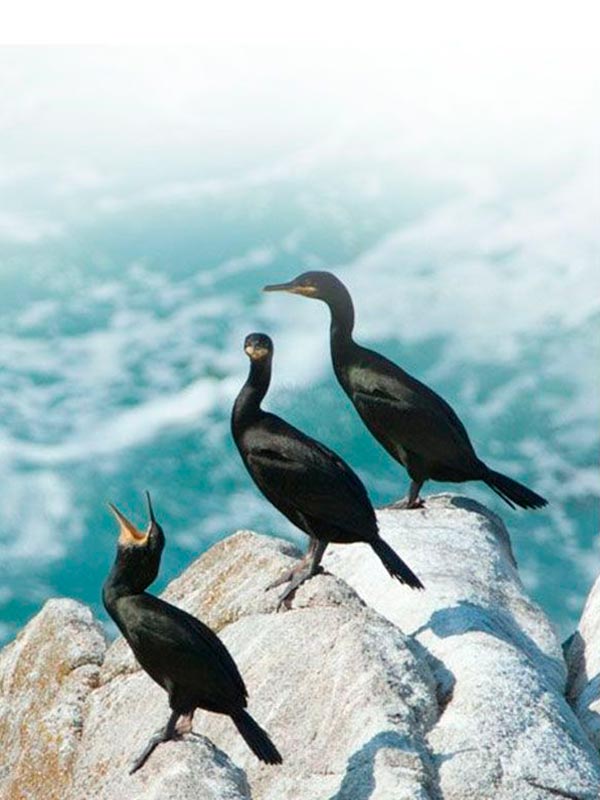 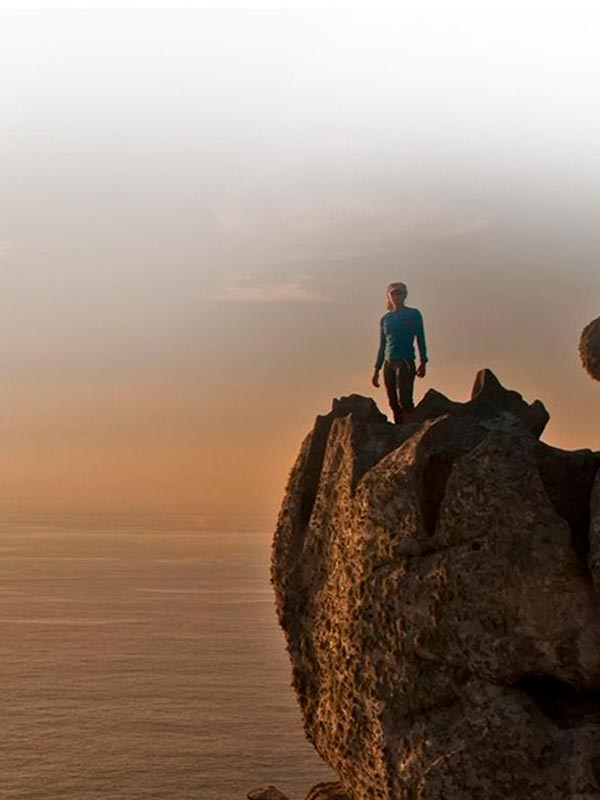 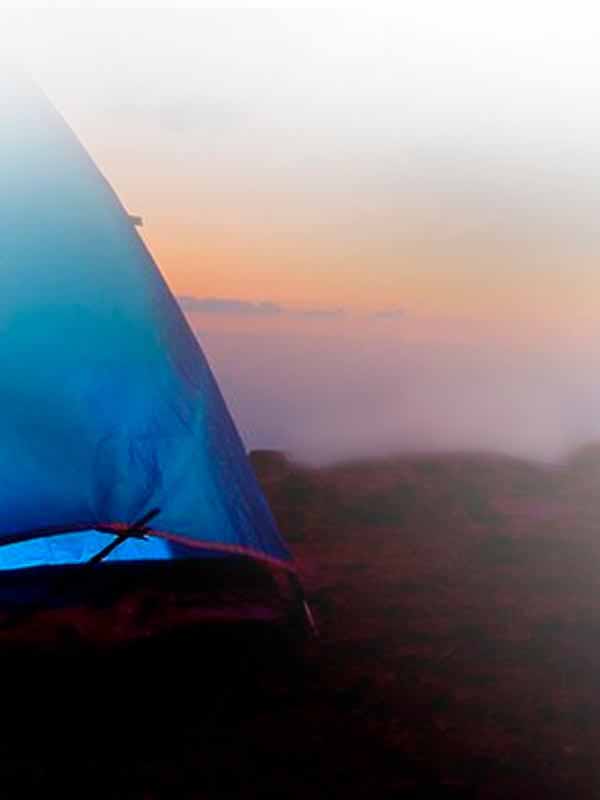 Sleep in the Cíes Islands and enjoy the incredible sunsets. 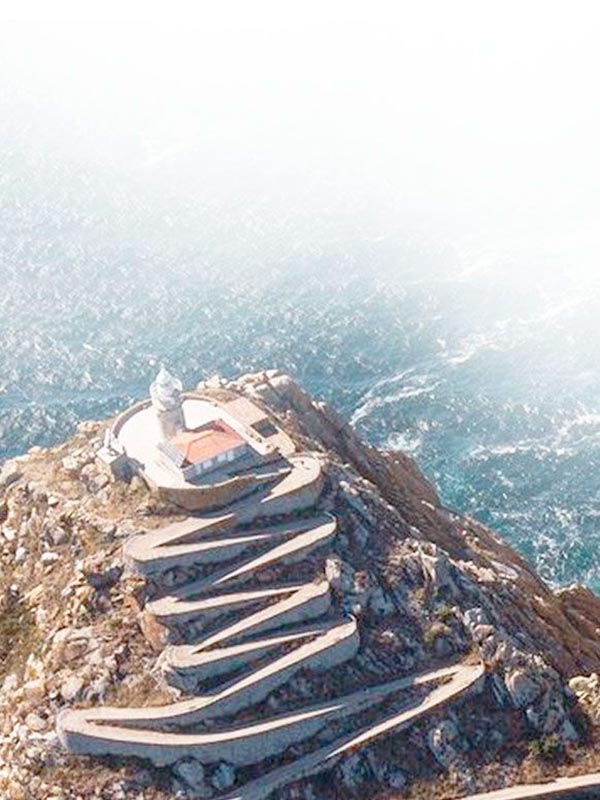 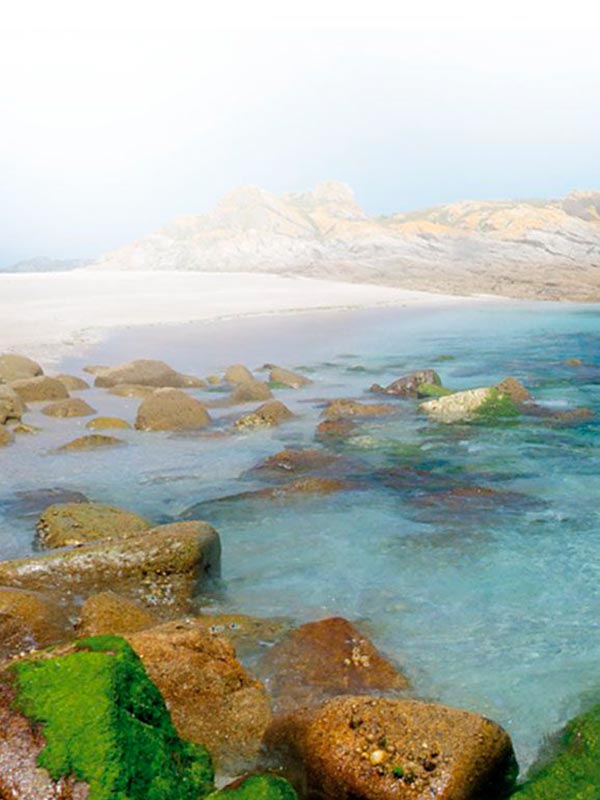 Discover the history of the Cíes Islands. 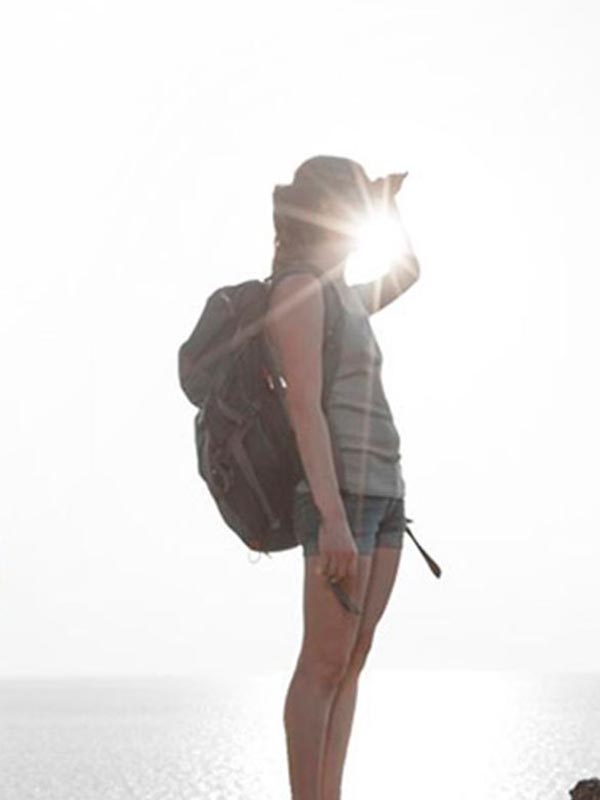 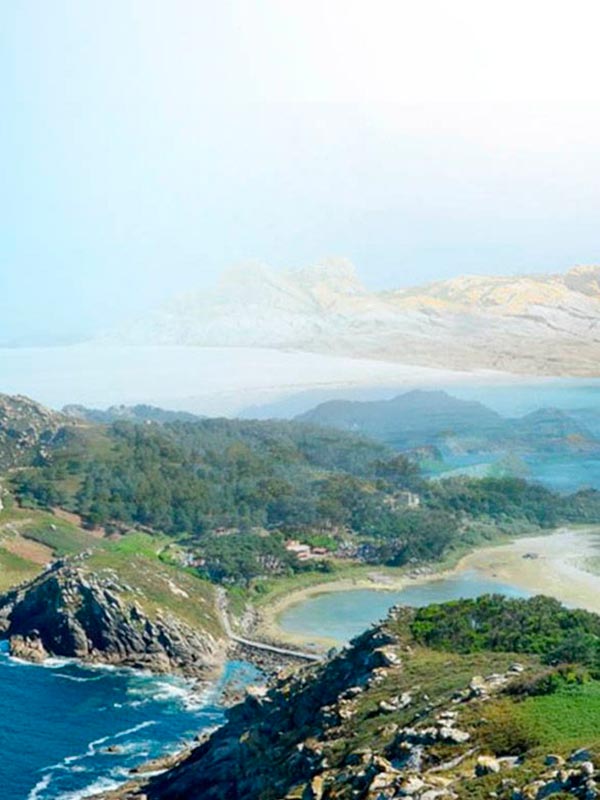 Get to know Cíes Island before arriving. 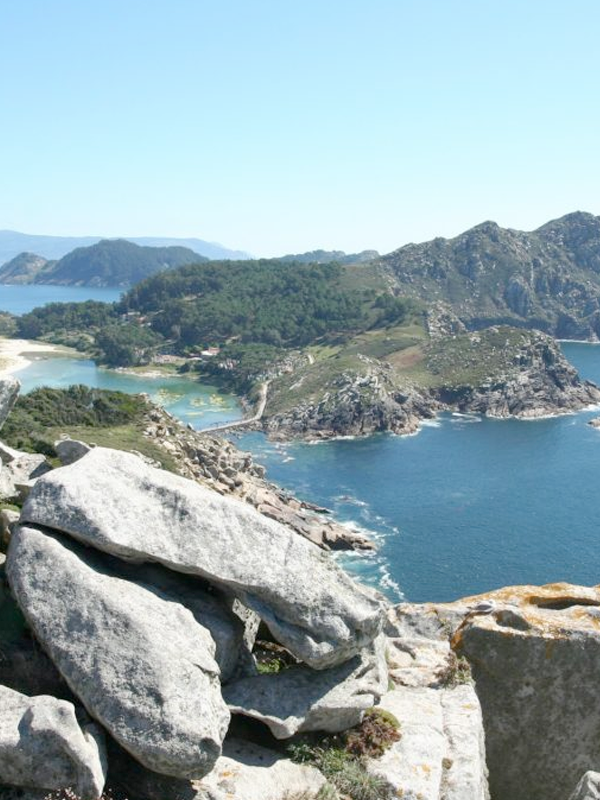