The lighthouses of the Cíes Islands

We often hear about the Cíes Lighthouse as one of the symbols of the archipelago. While it is true that this construction and its surroundings are a must visit, there are other lighthouses in the Cíes Islands that, despite not having the popularity of the first, have their own charm. In this post we will take a tour of the lighthouses built in the Illa de Monteagudo or Illa do Norte and in the Illa do Faro or Illa do Medio. Take some information about the Cíes Islands lighthouses and we assure you that, when you visit the archipelago, you will not settle for just walking to the Lighthouse of Cíes. You will want to see them all!

The northernmost lighthouse: Faro do Peito

The Faro do Peito, on the Illa de Monteagudo, marks the northern entrance to the Ría de Vigo along with the working lighthouses of the Península do Morrazo (located just opposite). The construction, which dates back to 1904, is nothing special: it is a 5-metre-high white tower that rises about 25 metres above sea level. But this lighthouse has a peculiarity that makes it unique: its location.

The pleasant journey that leads to Faro do Peito is a great way to get to know the north face of the Cíes archipelago. At the beginning of the path, the visitor will come across the magnificent Praia de Figueiras and, very close to the lighthouse, will come across a bird observatory from which to follow the track of the yellow-legged gulls and the shaggy cormorants that inhabit this rugged landscape. As we already mentioned in another post, ornithological tourism in Cíes will excite all those interested in seabirds.

As it is the closest point of the archipelago to the continent, the visitor has a privileged view of the Costa da Vela (coastal stretch of the Morrace peninsula) from the Faro do Peito, which is approximately 2 and a half kilometres away. At the Faro do Peito, with your gaze looking north, it is also possible to see the outline of the Ons archipelago. 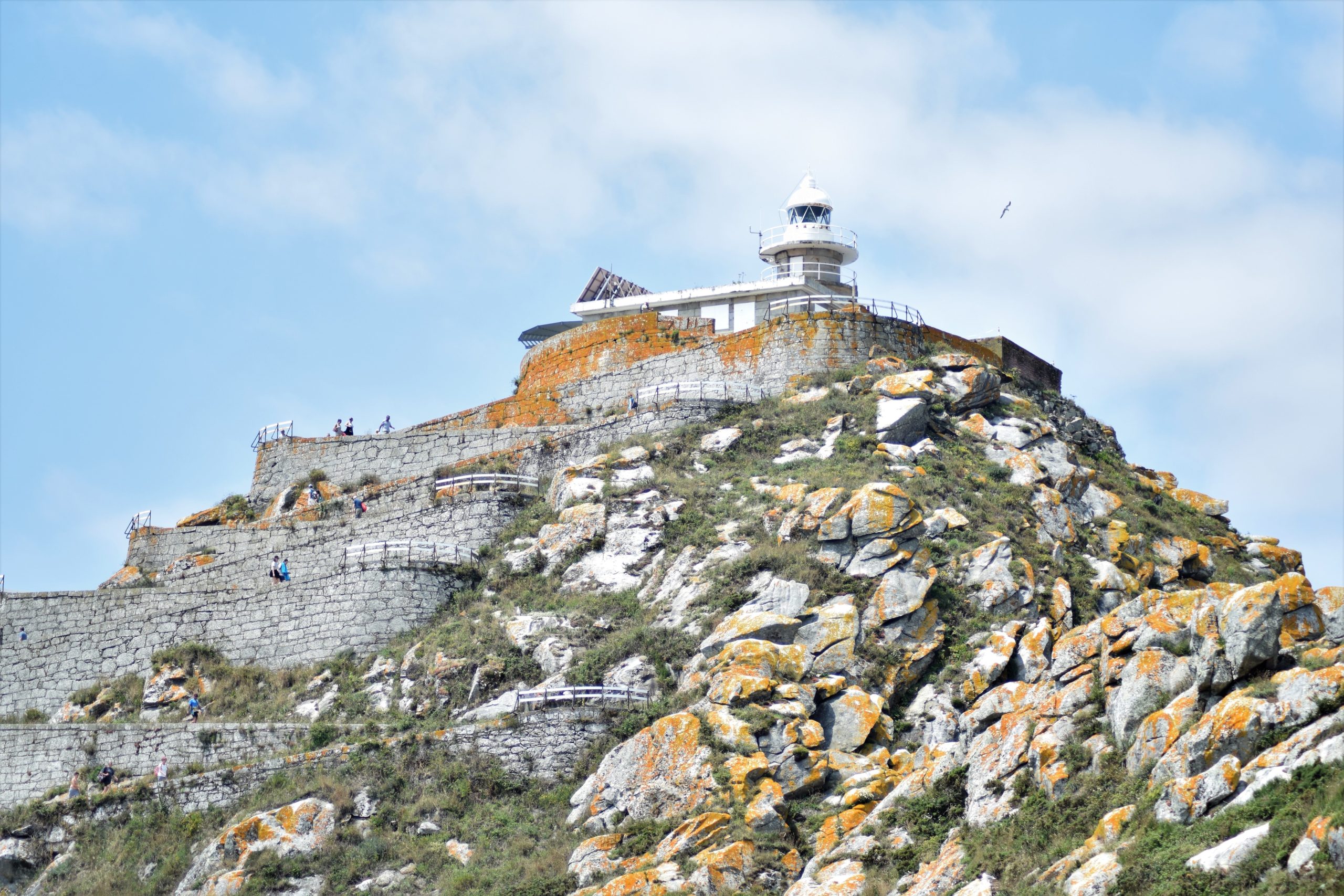 Path with reward to the Lighthouse of Cíes

From the Illa de Monteagudo or Illa do Norte we go to the Illa do Faro, which owes its name precisely to the light signalling tower that was built in 1851 at its highest point: the Cíes Lighthouse.

The route to reach the famous Cíes Lighthouse, which is 7 kilometres long, starts at the information booth of the Parque Nacional das Illas Atlánticas, located in the same Illa do Faro or Illa do Medio. The initial part of this tour borders points of great interest such as Praia de Rodas or Lago dos Nenos. At the height of Praia da Nosa Señora, the zigzagging ascent to the lighthouse begins: quite a steep ascent with bends that most hikers classify as medium difficulty. Anyway, the effort is worth it when you arrive at the Cíes Lighthouse, 180 metres above sea level, and enjoy impressive views of the cliffs and the whole of the islands.

On the other hand, the history that accompanies the construction of this lighthouse is also very curious. In 1842, the English consul in Galicia sent a petition to the Ministry of State that stated the following: “Agents of the Peninsular and Oriental Company of English steamers from the port of Vigo express the desire to put in their house, on dark nights, an orientation light on its landfall to the Cíes Islands to take the port safely”. In 1851, the Cíes Lighthouse was already a reality, although this granite tower with a glass dome did not emit light until 1853.

Initially, the Cíes Lighthouse illuminated the passage of the navigators using a large oil lamp; later, a petroleum one was used. An acetylene flasher was installed in 1939 which, after a series of improvements, still works today, with a range of approximately 25 miles.

Also in the beginning, the Cíes Lighthouse had a semi-circular house and an attached office, but they were demolished in 1979. In the 1980s, the lighthouse started to work automatically using photovoltaic panels that capture energy of the sun for its use. In fact, all the lighthouses in the Cíes Islands already work with solar panels. The intention of the Parque Nacional das Illas Atlánticas is that the archipelagos of Cíes and Ons will soon reach energy self-sufficiency.

But before, long before sustainability was a daily conservation issue in Cíes, the one who cared for and was in command of the lighthouse was the lighthouse keeper, who occupied these facilities with his family. The different lighthouse keepers who passed through the place also acted as teachers of the few children who lived on the island, who climbed the zigzagging path turned into a hiking trail daily to improve their language or mathematics. The excessive wind and rain made the lighthouse keepers fairly uncomfortable in the place, so they did not usually take too long to request a change of destination. The last watchman who lived in the Cíes Lighthouse abandoned this construction in 1959.

And another lighthouse that you cannot miss on your weekend getaway to the Cíes Islands is the Faro da Porta, in the southern part of the Illa do Medio. This cylindrical tower, painted white and blue, stands 65 metres above sea level and dates back to 1918. The construction of the Faro da Porta was necessary to improve maritime safety since, on days with thick fog, the light of the Cíes Lighthouse wasn’t appreciated.

To get to the Faro da Porta, you have to take the same path that leads to the Cíes Lighthouse but, at Praia da Nosa Señora, take the path that leads to the Carnacido pier. It is a simple and beautiful route that always faces the sea. As if this were not enough, once you reach the lighthouse, you will have unbeatable views of the Illa de San Martiño, the triangular-shaped island of the Cíes archipelago. In addition, in this same lighthouse, if you direct your gaze to the slope of Monte Faro you will see the remains of an old castreño town, Castro das Hortas, which is the most important archaeological site found in the Cíes archipelago. 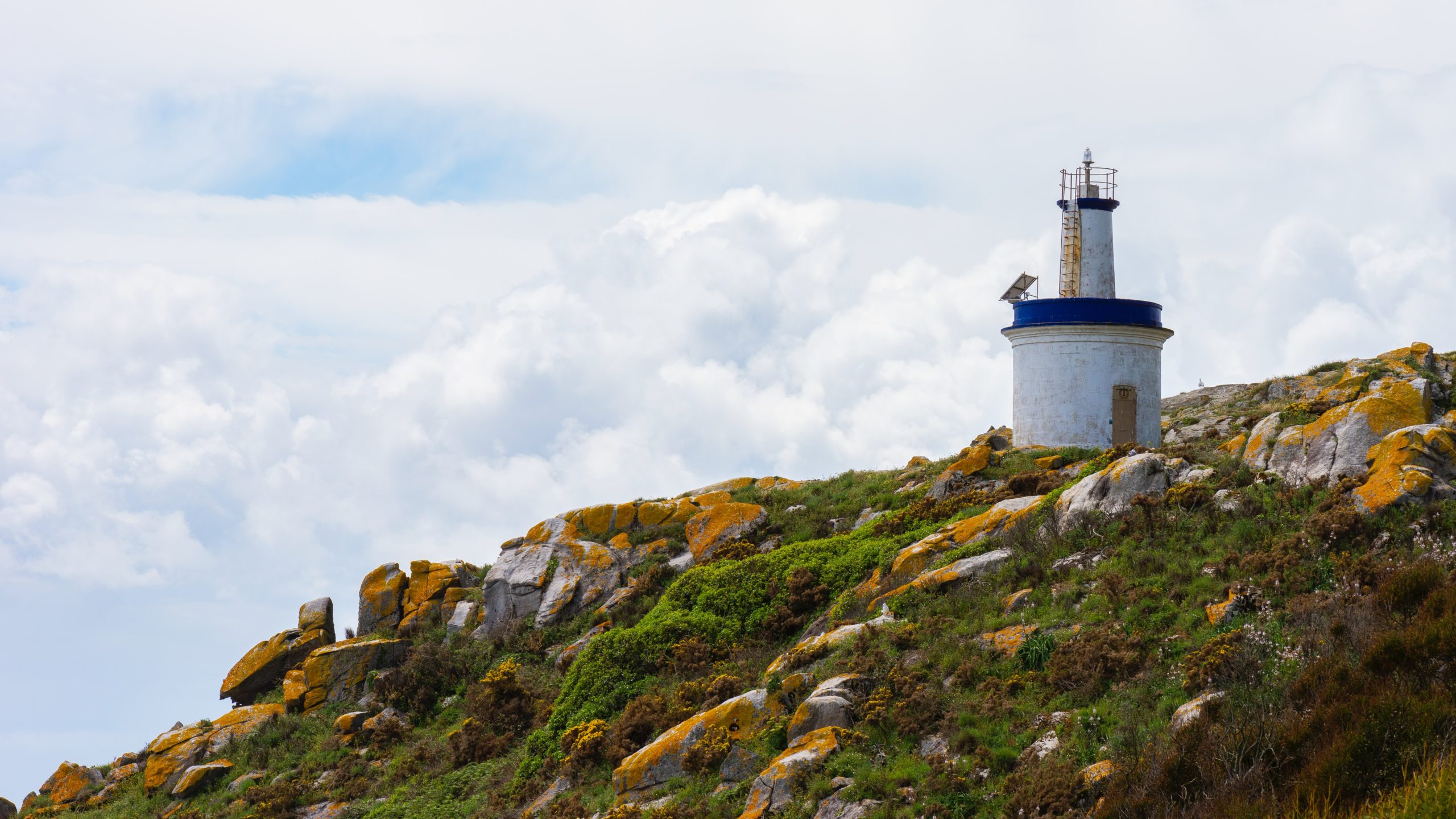 Also in the aforementioned Illa de San Martiño, the third island of Cíes, a lighthouse was built to increase maritime safety in the area and help sailors to better define their position: the Faro dos Bicos. As there is no regular transport line to this island, it is not possible to see this lighthouse up close, but the important thing about this signal is its great utility for ships coming from the Portuguese coast.

Although the Cíes Islands receive much of their tourism during the summer, the autumn and winter months are a good time to visit them. The tranquility and calm that you breathe on its beaches and on its hiking trails make it very attractive way to spend a weekend in Cíes in low season.

Naviera Mar de Ons sails to Cíes from the ports of Vigo and Cangas every weekend in the autumn and winter months, intensifying its service at special times such as the December long weekend (between the 5th and 8th of the month) and some dates of the Christmas season such as December 24 and 31 or January 5.

Now you know, book your ticket to Cíes with us and don’t miss this oasis of peace that is the Cíes archipelago in autumn and winter. You will love the walk to the Cíes lighthouses when you are wrapped up in a warm coat and well protected with sun lotion because, at this windy point of the Ría de Vigo, it is very sunny during the cold months.

One last thing before organising your getaway to Cíes: in autumn and winter, you will not need authorisation from the Xunta de Galicia to visit the islands. What we do ask is that, even in low season, we do not become lax, and continue to comply with all the measures indicated by the shipping company to combat the spread of COVID-19. Of course, we are maintaining the intense cleaning and disinfection work that we have carried out since June after each transport service.