What to see in Sanxenxo

Sanxenxo is a town in the province of Pontevedra considered by many to be the tourist capital of the Rías Baixas. It has plenty of charming spots worthy of this title: its beaches, its trails, its seafood and tapas restaurants and its proximity to the Parque Nacional das Illas Atlánticas make Sanxenxo a phenomenal place to spend the summer. Still don’t know what to see in Sanxenxo? We’ll give you some tips.

Every year, visitors from all over Spain and Europe come to Sanxenxo during the summer season. This municipality is 30 minutes from the capital of the province, 40 minutes from Peinador airport (Vigo), and less than an hour from Santiago de Compostela airport.
Sanxenxo’s main attraction is the coastline of more than 30 kilometres, with coves and beaches for everyone. In addition, of the municipality’s 24 beaches, 17 currently have the distinctive Blue Flag: A Lapa, Area de Agra, Areas, Areas Gordas, Baltar, Bascuas (nudist), Canelas, Caneliñas, O Espiñeiro-A Lanzada, Foxos, Major, Montalvo, Nosa Señora da Lanzada, Panadeira, Paxariñas, Pragueira and Silgar.

Although no beach in Sanxenxo ever disappoints its visitors, these are the ones that appear most often in travelogues: 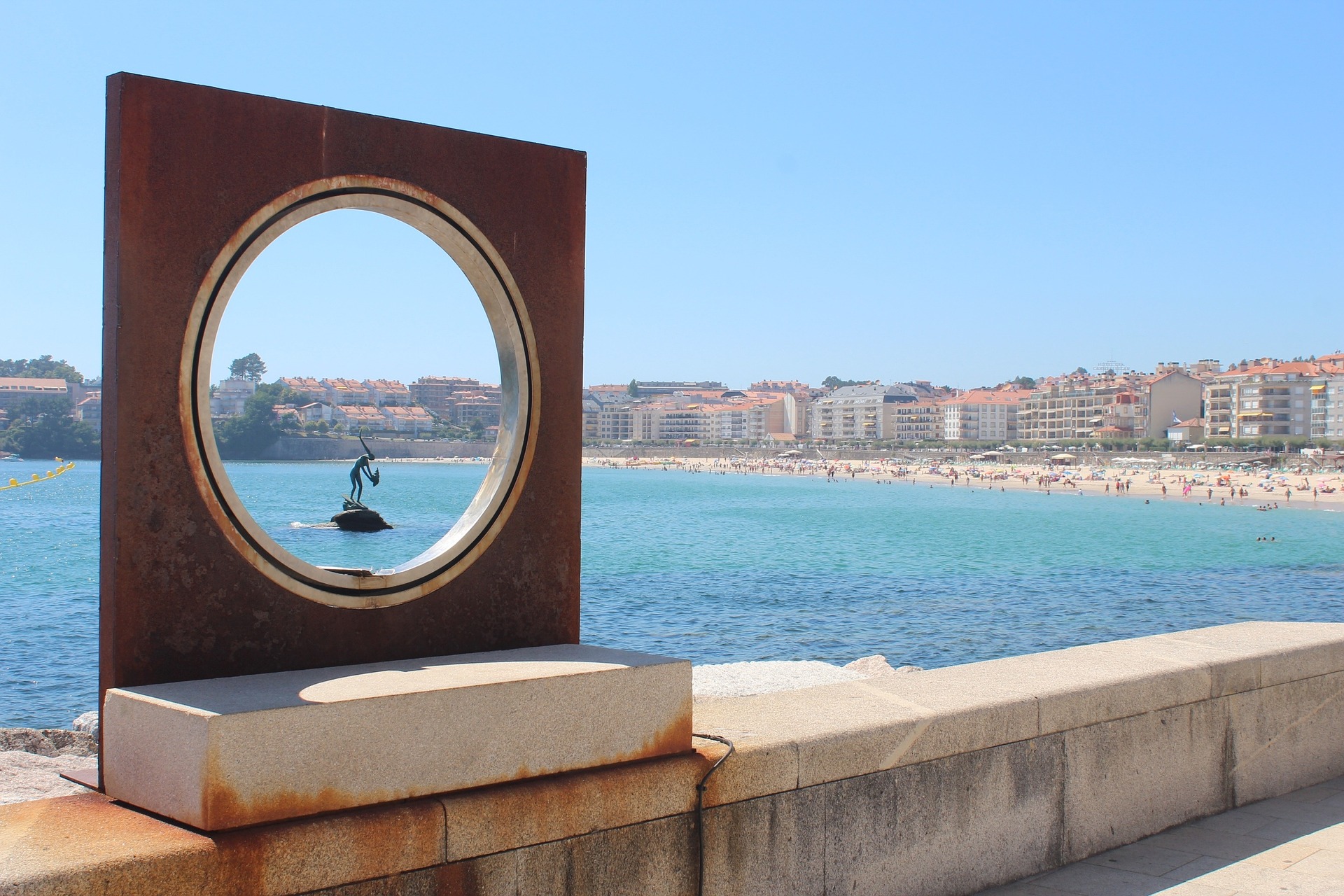 In the surrounding area of A Lanzada (between the beaches of Foxos and Areas Gordas) is the Ermida da Nosa Señora da Lanzada, a Romanesque style chapel from the beginning of the 13th century, which is of great touristic interest. Next to it are the ruins of a medieval tower (952 AD) which formed part of a coastal defence system to prevent Viking and Norman raids. Nearby is also the A Lanzada hillfort, a settlement which, being close to the sea, is believed to have operated as a trading enclave for fifteen centuries (from VIII BC to VII AD).

The surrounding areas of the Ermida da Nosa Señora da Lanzada, in addition to having a high archaeological value, are also of great cultural value. This enclave is linked to a series of rituals (the exact origin of which is unknown) that promote women’s fertility; on the last weekend of August, some women take the 9-wave bath at midnight in the hope of becoming pregnant.

What to see in Sanxenxo: viewpoints, trails, and ports

Sanxenxo also offers other entertainment for those who tend to avoid beaches and don’t believe in legends. In addition to the viewpoints of Festiñanzo and Pragueira, it is worth taking a walk to admire the sunset at the Punta Vicaño viewpoint (between Silgar and Baltar). Another essential trail is the A Lanzada Magic Trail.

It is also worth visiting the municipality’s two ports: the Juan Carlos I Marina, in the centre of Sanxenxo, and the marina and fishing port of Portonovo. You will find companies who offer water sports such as sailing. For older people, the port of Portonovo is very close to Rúa dos Viños, a phenomenal area if you want to try Galician wines and tapas.

Both the port of Sanxenxo and the port of Portonovo are departure ports for the Parque Nacional das Illas Atlánticas. From 19 June, Mar de Ons will sail daily to Ons from Sanxenxo and Portonovo (currently we only sail on weekends). On the other hand, our shipping line will make daily trips to the Cíes archipelago from these ports from July onwards. Click here for the timetables for Mar de Ons.

Decide which archipelago you want to see first and book your ticket with Mar de Ons. Now that you know what to see in Sanxenxo, discover the delights in Cangas do Morrazo, which is also the departure port for the Mar de Ons.