The most beautiful towns of the Rias Baixas

There are still people who haven’t had the pleasure of discovering the Rias Baixas and exploring their beautiful landscapes, relaxing on the spectacular beaches and savouring the delicious cuisine. If you are one of those people, we want you to take note of this list of the most beautiful towns of the Rias Baixas. That way, when you go, you will be able to visit them.

The Rias Baixas are a coastal area located in the southwest of Galicia, between Cape Finisterre, in the province of A Coruña, and the border with Portugal, in the province of Pontevedra. This area covers almost 300 kilometres of coast and is characterised for its spectacular estuaries. On the coasts of these estuaries lie several charming towns that we strongly recommend you visit.

A Guarda is a town located in the southwest of Pontevedra which borders with Portugal. At this point of Galicia, the mouth of the Miño river acts as a natural border, offering us a unique landscape that is well worth seeing. This small fishing town stands out for its beautiful promenade from which you can see the stunning panorama of the coloured houses that are home to the local fishermen. In addition, you will be able to try its delicious seafood at any of its restaurants. A Guarda’s most popular seafood is lobster, with a festival dedicated to it each year in July.

Another compulsory stop is Mount Santa Tecla, since here you will find one of the most important and best preserved archaeological site of Galicia, Santa Tecla fort. This is a Galician fort which dates back to the 4th century BC and which was declared a National Historic-Artistic Monument and Asset of Cultural Interest.

Baiona is a town in the province of Pontevedra and is part of the Metropolitan Area of Vigo. It is a municipality with a stately character, known for being the first port of Europe where the discovery of a new continent was announced, America.  Baiona has almost everything, a beautiful old quarter where you can take a stroll and enjoy something good to eat, ideal beaches for relaxation, a port of departure for visiting the Cíes Islands and a fascinating history to discover. In addition, during the summer it has a nightlife that attracts locals and tourists every year.

Baiona also holds its popular festival, the Arribada de Baiona. This festival helps the town of Baiona to travel back in time, to 1493. 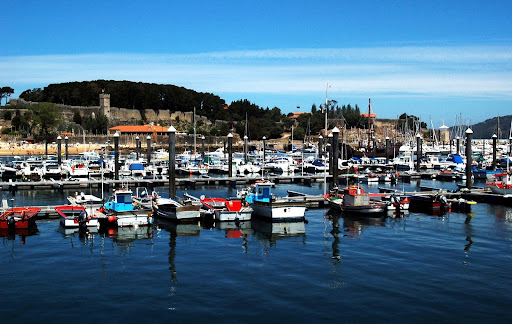 Cambados is a fishing town in the region of Salnés, situated on the Ria de Arousa. Its historic collection comprises numerous squares, churches and Renaissance style manor houses. Its cobbled streets hold a lot of charm and its bars and restaurants offer exquisite food.

This town is known as the capital of Albariño wine, thanks to its large wineries and enormous crop fields. In honour of this title, the Albariño Festival takes place each year, the oldest wine festival in Galicia. If you like wine and good food, we recommend you visit.

The Lonely Planet travel guide created a list of the 16 most beautiful towns in Spain and Combarro came in at number one. This small fishing village situated in the Ria de Arousa, very near to Cambados, is truly charming. Its historic collection has been declared an Asset of Cultural Interest. If you wander through its cobbled streets, you will discover the village’s main attraction, the granaries.

The granaries of Combarro are situated on the seashore for the convenience of the people of the village who once worked in the crop fields situated on the other side of the ria and brought the crops to the granaries by boat.  Nowadays, this characteristic element of Galician rural landscape is the main tourist attraction for those who visit the area. 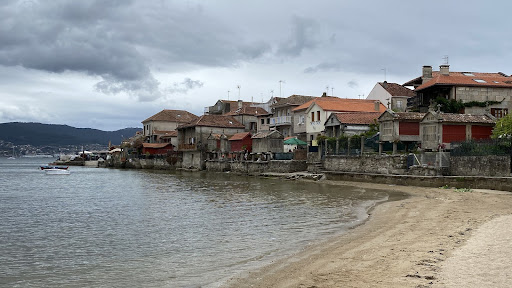 Muros is a town located at the foot of Mount Louro, in the far north of the ria de Muros y Noia, in the province of A Coruña. Its old town of Medieval origin was named Historic-Artistic Site in 1970 for its faithful representation of a fishing village of that era.

One of the most charming parts of Muros is its beautiful promenade, where you can see the area’s fisherman’s cottages and the fish market selling the fish and seafood that you will then be able to try in its numerous taverns.

One of its best preserved monuments is the convent of San Francisco, which stands out for its small Gothic-style church and its stunning cloister from the mid-17th century. Another tourist attraction of the area is the ‘Pozo do Cachón’, one of the largest tide mills in Spain.

The Medieval town of Noia is situated in an inland area of the ría de Muros y Noia, in the province of A Coruña. This town is located very near to the city of Santiago de Compostela, which is why, in its day, it was known as “the port of Santiago”. During the Middle Ages, its port became the most important of the Atlantic Arc.

The Medieval character of the town is admired in its labyrinth of cobbled streets and in its churches and other buildings from the era. In addition, Noia is home to the largest collection of Medieval tombstones in Europe. Visiting this small fishing town won’t take you long, you can stroll around its ancient streets, eat in one of its numerous eateries and try scrumptious delicacies such as its infamous ‘empanada de berberechos’ (cockle pie).

Arousa Island is a small island situated on the Ria de Arousa and which joins the coast via a long bridge that offers some extraordinary views. This island is perfect for spending a relaxing day in the heart of nature. Its beautiful beaches and hiking routes are particularly noteworthy. One of places that is most popular with visitors is the ancient lighthouse that has now been turned into a restaurant and has a terrace with some incredible views of the ‘bateas’ on the ria (platforms used to farm mussels).

On Arousa Island, in addition to the activities you can do on dry land, there are also services that enable you to enjoy water activities like canoeing. 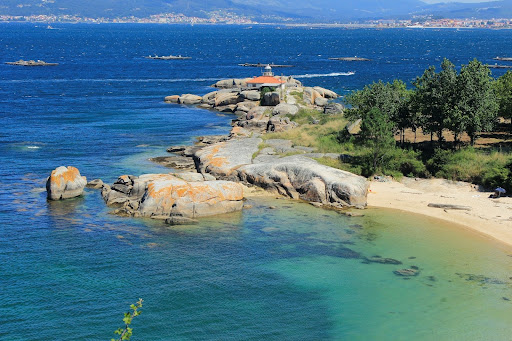 Sanxenxo is one of Galicia’s tourist capitals. This town is situated in the region of Salnés and is bathed by the waters of the Ria de Pontevedra. Thousands of tourists come here each year to enjoy its beaches, stroll along its promenade and delight in Galicia’s typical cuisine.

Sanxenxo offers all the necessary comforts to ensure visitors enjoy their stay. You will be able to find a wide range of accommodation to spend the night and places to eat or go out partying. In addition, nearby, you will be able to enjoy spectacular natural landscape featuring its beautiful beaches. Many of these beaches have been awarded the blue flag so they are suitable for the use and enjoyment of swimmers.

Sanxenxo also has a port from which you can visit the Atlantic Islands, the Cíes Islands and the Island of Ons, as well as trips around the Ria de Pontevedra with mussel tasting. 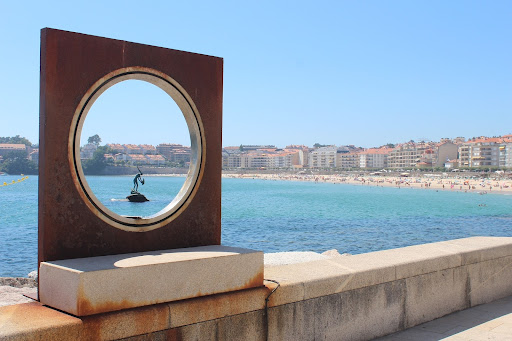 Tui is a town located on the banks of the Miño River, on the border with Portugal. This town preserves a magical Medieval historic quarter with numerous cobbled and narrow streets that will transport you to another era. There you will be able to visit Galicia’s most famous cathedrals, the fortified cathedral of Santa Maria, which features the region’s largest preserved Medieval cloister.

Another characteristic element of Tui is the international iron bridge that crosses the Miño river, joining it with the Portuguese town of ValenÇa do Minho.

As you can see, the Rias Baixas are home to many charming places that are well worth a visit. This part of Galicia is spectacular, not just for its towns, but for the nature that surrounds them. We recommend you visit us and that, if you are staying a little longer, you don’t hesitate to also visit the Cíes Islands or the Island of Ons. There are several ports that take you to these natural spaces of the Atlantic Islands, where you will also be able to enjoy the Rias Baixas, but from a different perspective.