Birdwatching on Cíes and Ons

The Cíes Islands and the Ons archipelago always appear on the lists of the best Spanish destinations for birdwatching tourism. For many of the people that visit the Atlantic Islands National Park, watching the birds carrying out their daily lives is a tremendously relaxing activity. You don’t even need to be an expert birdwatcher to really enjoy this:  if you want to go birdwatching on Cíes and Ons you only need to get hold of some good binoculars and follow the recommendations that we provide below. Set a date to go birdwatching and  reserve your tickets to Ons and Cíes on our website!

Seabird species on Cíes and Ons

There are six species of seabirds nesting in the Atlantic Islands National Park, although depending on the time of year, you can easily see eleven additional species. On the Cíes and Ons, you can see different species of gulls, cormorants, terns, petrels and shearwaters, auks and gannets. Above all, the richness of the sea around both archipelagos supports extremely valuable colonies of yellow-legged gull and common shag.

To enable you to see these and other birds, Cíes and Ons has its own observatories and strategic points: for example, the Peito Lighthouse (on the island of Monteagudo, on Cíes) or the Buraco do Inferno (on Ons). At these locations, and in others that we will mention throughout this post, you will be able to observe the birds on Cíes and Ons without disturbing their tranquillity, which is very important. One should not forget that both Cíes and Ons are Special Protection Areas for birds (SPA): Cíes since 1988 and Ons since 2001.

Now, create a space in your travel notebook and take some notes on the main seabirds on Cíes and Ons, as well as on some tips to follow so that you can find and identify them:

This large gull has a grey back and white parts on the head and underside. The legs are an orange-yellow colour.

In the Atlantic Islands National Park there are 16000 nesting pairs distributed throughout the islands and islets. 7000 of these pairs are on Cíes and 3000 on Ons. However, these gulls are well-known because they nest in all the towns of the Rías Baixas.

On Cíes and Ons, yellow-legged gulls tend to establish nesting areas on the edges of routes or main tracks. On the island of O Faro or Illa do Medio, on Cíes, it is very common to see them on the ascent to the Cíes lighthouse. Their nests can be seen from the end of April and, from May onwards, you can see the chicks. In September they leave their nesting grounds in the Park until their return in the following March.

Remember, during your birdwatching getaway on Cíes y Ons, don’t be overconfident and get too close to the yellow-legged gulls. Although they are used to people, they will defend their nests from any intrusion.

One last thing about the yellow-legged gull: on these islands you will also see their chicks or juveniles. These are a good size and brown in colour. They take four years to attain their grey and white adult plumage. 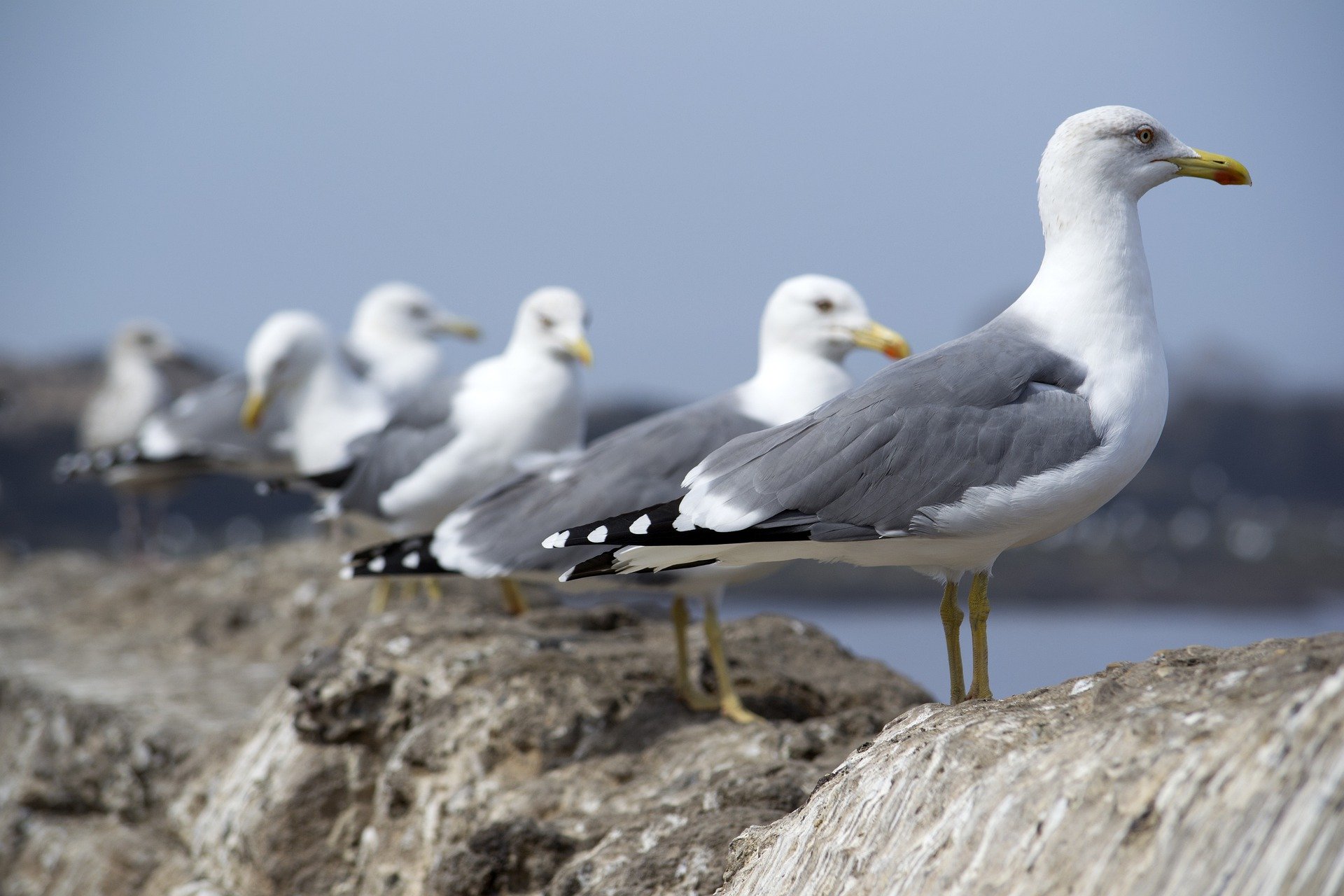 The common shag is a black-coloured seabird. It has a small head, a thin bill, a surprisingly long neck, and its plumage has a greenish sheen. During the first six months of the year, adults have a crest on the top of the head.

In the Atlantic Islands National Park, there are approximately 1100 pairs of common shag. 700 of these are in the Ons archipelago and 300 on Cíes.

You will be able to see them in flight, resting on the rocks or in the sea, and swimming (they are very good divers and they swim with the body partially submerged). You can see them in groups or on their own.

Between January and July, the juvenile common shags gather in colonies around the islands; during the winter they are more dispersed. A good location to see them is the area surrounding the islet of Viños, on Cíes, a very popular spot for diving and close to Rodas Beach.

When observing birds on Cíes and Ons you can identify juveniles of the common shag because their plumage is brown instead of black and they have lighter brown patches on the chest and belly. 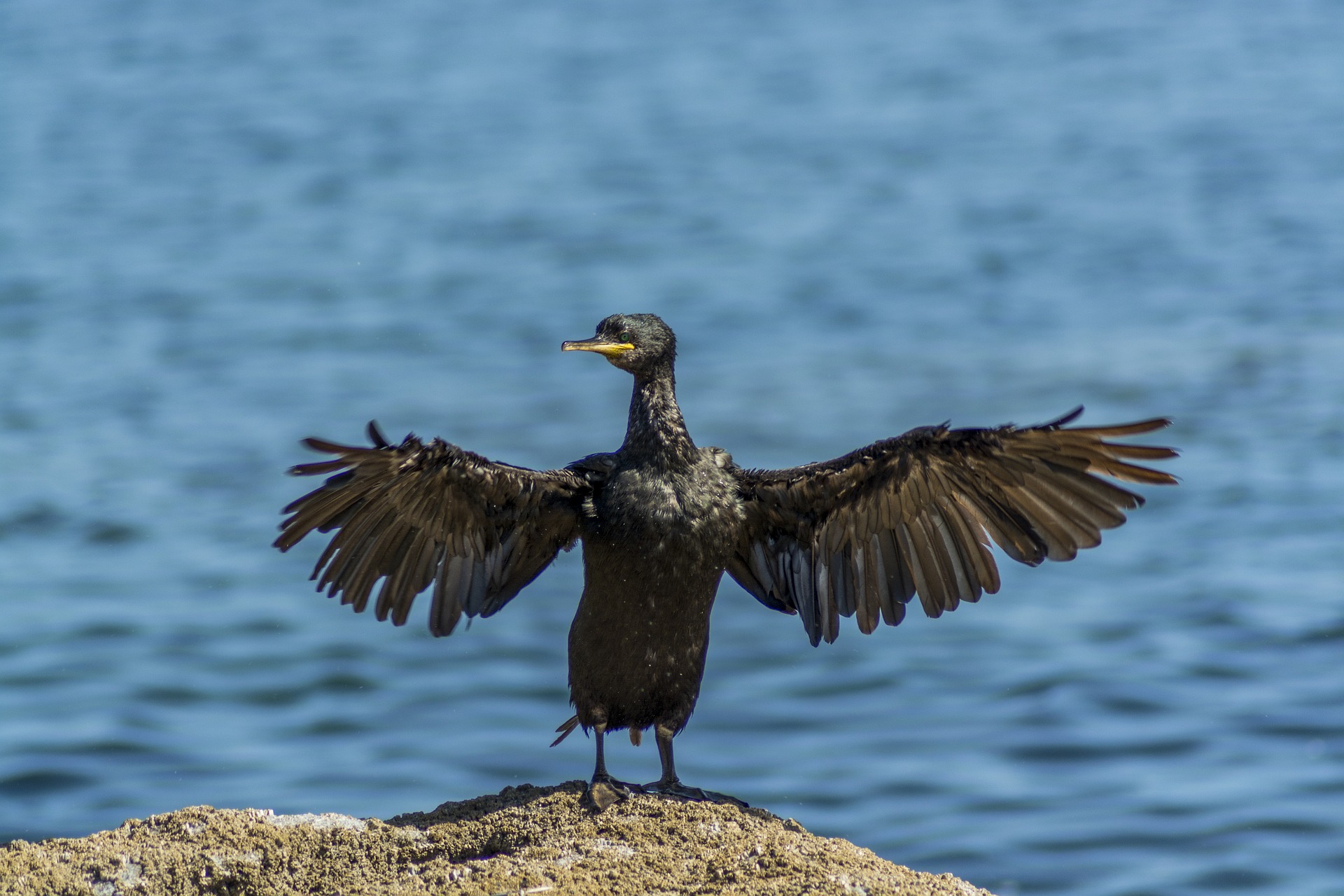 Other birds that you can see on Cíes and Ons

Yellow-legged gulls and common shags are the most numerous birds on Cíes and Ons but, keeping the following advice in mind, you will be able to see other specimens (some of which belong to other species):

To these seabirds you can add the guillemot, the Balearic shearwater, the razorbill and the Manx shearwater. And if that were not enough, on the cliffs you can see peregrine falcons, and in areas with less of a maritime influence, you can also see specimens of the common raven, the alpine swift, the European nightjar and European turtle doves.


Reserve your ticket to Cíes and Ons with us

Everything about the identification and sighting of birds on Cíes and Ons is an entertaining, de-stressing activity that you cannot afford to miss out on. Check our ferry timetable to Cíes and Ons, request a visitor permit from the Xunta de Galicia and reserve your tickets with the Mar de Ons Ferry.  With the authorisation from the Xunta you will receive a pre-reserve code that you will need to use for buying the tickets; Please be aware that these codes are valid for two hours!

Put your trust in our ferry service and enjoy the rias of Vigo and Pontevedra! We are diligent and exacting on all our trips in the observation of measures against Covid-19.

Observe the birds on Cíes and Ons, spend a few days camping, take your first trip out on a kayak… What would you like to do on your visit to the Atlantic Islands National Park?